Thank you for visiting.
I have decided to migrate the content of this blog to another poskad siti. You'll see me there.
Posted by siti nurbaiyah at 5:49 PM No comments:

The FreedomFilmFest 2010 organiser had allowed us extra time to complete the film, but we wanted to finish this film ASAP.

After last night's screening with the focus group, I noted some corrections that had to be made including a few on the subtitles.

Today, the mistakes were duly corrected and graphics are added to the title page. We made a final check on the film; names of people, places, subtitle, end credit, title, graphics, colour and sound.

After the film preview, we gave Joe the nod to create a master copy. Until today, I have lost count the number of times I previewed the film.

The film, as we proudly called it Kisah Tauke Mancis dan Minyak Tumpah, is completed.
Posted by siti nurbaiyah at 11:49 PM 2 comments:

Screening to the focus group: my family

Suddenly I had a tight knot in my stomach (where were the butterflies?).

The final cut of the film documentary, all 28 minutes of it complete with title and end credit will be screened in my living room to the most important people: my parents, sisters and their husbands, nieces and nephews and my own family.


Their feedback is essential to help me gauge a general response to this film. As a family, they have been supportive of my previous work (including television dramas, docudramas, and a novel) but I dared not speculate their reactions towards this film, largely because it was rather different in tone and subject. But they have been, and for this film could be, critical too.

Could I accept criticism from the people I love? Would I be mature enough to sift between support and honest views? The knot in my stomach tightened.

The family-cum-focus group arrived in batches. After the last one was seated, the lights were dimmed and the final cut of Tauke Mancis dan Minyak Tumpah played. The room was silent, even the young ones paid serious attention to the opening scene.

I stood at the back of the room gazing at the faces of the audience, capturing in mind their expressions and gestures.

They clapped when they saw my name on the title run, cheered when they heard my voice narrating the film in the background, they were loud and generous with running commentary as the film progressed. At  about two third of the film my father walked out of the room. Clearly perturbed, he had to smoke but continued watching from the doorway. My mother sat very still.

At the end of the film, they gave me a round of applause, I switched on the lights, grinned and the knot in my stomach grew into a massive Gordian.

In brief here are the comments:

“You can't change this any more? The intro is just too long.”

“What's wrong with PKNS? The residents should have sued them a long time ago.”

“Can I have the end credit song made into a ring tone?”

“This film should not be shown at international film festival. It is embarrassing to tell foreigners of our internal conflicts.”

“What do we do with the extremists?”

The last comment was the Alexander sword that swiftly sever the Gordian knot. Alhamdulillah.
Posted by siti nurbaiyah at 11:55 PM No comments:

Adding sound and subtitles: The trouble with meaning

Today is Malaysia Day. After 47 years of formation, this year is the first that it is declared as a public holiday and I was working.

Why only now? I made the mistake of stirring the hornets' nest and Sheridan went into lengthy detail on the political logic behind it. (A year ago, his article on the subject appeared in Aliran)

After work, we were at the Editor's suite making final checks on visual, sound an subtitle. It wasn't quite as simple as we thought it would be.

Timecode editor Joe, fresh from his balik kampung trip last night, had laid out the final sound mix (the audio post-production was done by Christopher Higgs of Higgs Asia) and were pasting on the subtitles to the visual.

At this point, no changes should be made to the duration. Or risk having to repeat another audio post-production. Changes can only be made on minor footage switch, saturation, colour, superimpose text and stuff like that.

Once the final sound mix was laid out on the visual, we previewed the film. I had a funny feeling watching it with enhanced sound effects. The music and sound significantly evoked the mood and gave a certain depth to its meaning. Now I understood the impact of every layer of the process. The writing, the footage, the sound and the effects.

The subtitling, which was the next process, caught us in a nasty tangle.

Both of us had worked on the subtitle and completed it before Hari Raya. We split the film right in the middle, while I took the beginning, Sheridan took the other half to subtitled it. Then we swapped and checked each other's work before handing it to Joe.

Previewing it now at Joe's studio, the subtitle has somehow altered the meaning.

Sheridan and I began our epic disagreement on semantics. Did the professor mean create, draft or craft? What did he mean when he said etnosentris agama dan etnik? Was it extremists? In what context does the pronouns – dia, benda tu, perkara itu, applies to?

While the bickering went on at every other quotes, Joe, who was used to it by now, fiddled with his iPhone and resumed work after we reached a consensus. It was tedious.

When all the subtitles were laid out, we reviewed the film again. The subtitles had added another dimension of meaning to the film. If the audience understands the Malaysian spoken lingo, they will decipher the meaning at the primary layer. If the audience are not familiar with the lingo, they will rely on the subtitles, which offers a translated, paraphrased and contextualised secondary meaning. If they understand both the lingo and English, they will be able to have a deeper understanding of contextual and primary meaning.

Next came the end credit; choosing the right type of font, adding the logos of the organisations involved with the project and making sure all the names were correctly spelt and no persons were left out.

It was past midnight when we finally finished the three processes, and previewed the film again. Today we worked for 11 hours. The film is still unfinished. Joe still have to work on the colour and graphics.

We are coming back to the studio on Saturday.


Note: I deliberately posted this entry on Sept 16, even when the actual event moved past midnight and therefore should fall on the following day.
Posted by siti nurbaiyah at 11:59 PM No comments:

Christopher Higgs, a freelance sound engineer worked on our sound.

He tweaked, peaked, sharpened, dulled, lowered, cleared and ultimately highlighted what should be heard on the film. He worked in a freezing temperature sound suite wearing cotton short sleeves and Bermuda khakis, while production consultant Anna, Sheridan and I were wrapped to our necks in flannel blankets.

The eight scores composed by Don evoked the right emotion and heightened the meaning of the scenes perfectly.  It was at this studio that we figured out how to add impact to the ending. We tried so many things on creating a forceful ending but none really worked, like a sentence without a fullstop. It hung, floating about, aimless.

Maybe a matchstick sound effects? Chris added the sound of a match being lit. No, it still did not punctuate the film and gave it a solid ending.

How about this, a fireball? Chris dug it out of his sound library and added to the matchstick sound. He forged those two sounds and what emerged was the sound of a lit matchstick lighting up flammable fume.

It worked. Like magic.
Posted by siti nurbaiyah at 8:05 PM No comments:

A Bahalul reminder for the Caliph, as Syawal approaches

Today is the 28th day of Ramadan 1431 Hijr, and the film is still unfinished. We are way behind our own work schedule.

After the audio post-production followed by critical reviews by the consultants, we had to consider more changes on both audio and visual. Back to the drawing board and we pushed the deadline to today. But fate decided otherwise, and we prayed that this film would finish in time for the producer's deadline of Sept 15.

In other words, my Eid leave will be very short.

Last night I received an Eid greeting from a dear friend, Awang Goneng. Although I'm pretty sure he made this up, the ditty struck a chord:

Eid Day, Harun al Rashid on his steed
Riding in his Imperial robes, into the street
Soldiers clearing the Sultan's path
And the people applauded.

Bahalul the Wise Fool stopped Harun in his tracks
And recited words to guide the Grand Caliph
and through him, down to us -
And the gist of it is this:

The Festival is not for dressing up in fine new clothes.
The Festival for serving Allah and being aware of your Lord.
To celebrate is to be Sultan not of your realm but of your heart.
Sultans of the realm pass into oblivion,
but the Sultan of the heart is never forgotten.

To celebrate the Festival is to be delivered from the
divine punishment at the Resurrection.
The Festival is not for the wearing of perfumes,
but for being regretful of one's sins,
repenting and not committing them again.

It is not for riding on horseback, but for giving up one's faults.
Not about sitting on the imperial throne,
but about crossing the dreadful Bridge,
to sit on the thrones of Paradise.

It is not for boasting about one's palaces
and power, but by bringing the light
to the darkness of the tomb and equipping
it through good works.

The mighty Caliph heard this and wept.

Wishing you a blessed Eid, wherever you are. Selamat Hari Raya dan maaf zahir batin,

sincerely, nurbaiyah.
Posted by siti nurbaiyah at 10:42 AM No comments:

We had a meeting with Don, the score composer to work out the changes today. Don was very attentive and after reviewing the cut, he agreed to make the changes in just a few days. We were working against an excruciatingly tight deadline.

Looking at the calender we have a week before Hari Raya but realistically the holidays will begin earlier.  This weekend means last minute shopping to all us, followed by the balik kampung exodus on Wednesday and Thursday.

Who will be able to work during Raya? Seriously.

We only have three days to work on the score before handing it over to the sound engineer Christopher Higgs.
Posted by siti nurbaiyah at 7:49 PM No comments: 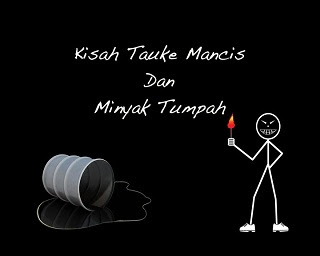 Click image for screening dates and ticket reservations. See you there!